I went to Artemesia this morning to see if anything new has arrived, and I was out of luck. The Trumpeter Swan is still around, and a few other ducks, but  not a lot of variety.

I also stopped at Buddy Attick afterward, but it continues to disappoint.

It’s been a while since I posted a Carolina Wren

This is one of the rare days I could get decent look at the Hooded Mergansers.

Canada Geese were arriving all morning.

There were many American Coots at the lake today.

I was undecided as to where to go yet again. I hate going places where there’s nothing to shoot, and I’m not crazy about driving long distances. Something to shoot won out, so I headed to Blackwater, which is about an hour and a half drive.

It wasn’t really great, but it was good enough.  There wasn’t the variety I’ve come to expect at this time of year, but a quick stop at Oakley Street made up for it. The locals feed the ducks there, and you can usually find a good variety of birds, fairly close to shore.

I haven’t seen many Scaup this year.

A lone Bufflehead was feeding with the geese.

This Great Blue Heron was the first bird I saw.

Many Canvasbacks were eagerly waiting for a meal.

Only a few Redheads were present.

The Hooded Mergansers were very skittish.

There are still more Mallards than any other type of duck.

There were only a few Northern Shovelers.

I was at a loss as to where to go this morning, so I went with Sandy Point in hopes of a good sunrise. It was not to be. I got a few birds and a half ass sunrise , then went to Thomas Point.

The Thomas Point birds seem to be staying further out this year, so it’s tough to get good photos.

Canvasbacks can be sound along Thomas Point Road.

Tundra Swans will be around all winter.

This Ring Billed Gull has found some kind of shellfish.

These Bufflehead were waiting for the Sun to rise.

I heard a tap, tap, tapping-and when I turned around, this Song Sparrow was pecking at his reflection on the hood of my car.

With everything closed on Tuesday, and commuter traffic heading West. I went East to Blackwater.

It was actually pretty good, but ducks are in short supply. Eagles and squirrels made  up for it.

Thousands of Snow Geese were leaving as I arrived.

Bald Eagles were abundant, as usual.

Many Tundra Swans were in residence.

Appearance: The Delmarva fox squirrel has a steel or whitish gray body and a white belly. It has short, thick, rounded ears. Its full, fluffy tail has black edgings and can grow to 15 inches long. The fox squirrel can grow to 30 inches in length and weigh up to 3 pounds. Habitat: Prefers quiet wooded areas, especially mature loblolly pine and hardwood forests with an open understory. Also found in woodlots near farm fields and groves of trees near water. Spends a considerable amount of time on the ground, rather than in trees like the common gray squirrel. Range: Found only in small isolated populations on the Delmarva Peninsula, mostly in Kent, Dorchester, Talbot and Queen Anne’s counties in Maryland. Biologists have moved some squirrels to other parts of Delaware, Maryland, Pennsylvania and Virginia to help develop populations there. Historic range extended as far north as southern New Jersey and southeastern Pennsylvania.

I managed only a short trip to Thomas Point on this gray morning as I had work to do.  A Common Eider was seen there a couple of days ago, so there were several birders looking hard, but it hadn’t been found when I left.

The good news is that there was a good variety of species, so it may be a better year than last year.

Two Common Loons flew by as I waited.

Buffleheads continue to be the most common duck at the point.

A flock of Common Goldeneyes was actively feeding.

The weatherman promised a sunny day, and he delivered, for a change. The local parks are closed for Christmas, so I headed to College Park to check out the ducks.
Oddly, there were very few, but the Trumpeter Swan was very cooperative.
I decided to try Buddy Attick, which hasn’t been good to me recently, and I found a few good, albeit distant, ducks.

A few Canada Geese flew while I was watching.

This Great Blue Heron appeared to be napping.

These Hooded Mergansers were staying near the center of the lake.

I got very close to this Trumpeter Swan.

I haven’t found many Redheads this year.

I went back to Blackwater this morning as I’d heard more ducks were in. I didn’t really find that many, but the Eagles and Pelicans made up for it.

American Wigeons are one of my favorites.

This Great Blue Heron looked a little awkward as he too off.

A large flock of Snow Geese flew off as I approached the marsh.

A few Killdeer were in the mud flats.

There were plenty of Bald Eagles around today.

A large flock of Tundra Swans was in the marsh.

This is the first time I’ve seen the Blackwater Pelicans in flight.

Between the weather and work I haven’t posted much lately. I had a decent day today, so this is a catch up as well.

Three Buffleheads were on the lake.

Artemesia is the only place I’m seeing Ring Necked Ducks.

I haven’t seen many Scaup this season.

Ruddy Ducks are doing well at the lake.

Hooded Mergansers have been in short supply so far this year.

Another Brown Pelican at Thomas Point.

I found this Bufflehead at Thomas Point.

This Northern Shoveler was at Blackwater NWR.

This Red Tailed Hawk was at Blackwater NWR.

This gives you a good idea how large the Trumpeter Swan is-the Canada Geese look like ducks.

I took another weekend trip to Lake Artemesia and it was well worth it. The Trumpeter Swan has been there in the past, and apparently just returned.

The usual ducks were in attendance, and a few passerines showed up as well.

A view of Lake Artemesia.

There are many Song Sparrows along the edge of the lake.

A small flock of Cedar Waxwings is almost always around in Winter.

These Bufflehead hens were at Thomas Point.

This Common Loon was also at Thomas point.

I forget where I saw this Robin.

I caught this Ruddy Duck as he was taking off.

Several flocks of Dark Eyed Juncos were feeding near the lake.

Mallards can be found any time of year.

There were three Northern Flickers in this tree.

I saw a lot of Bald Eagles this week.

Cornell: “Trumpeter Swans demand superlatives: they’re our biggest native waterfowl, stretching to 6 feet in length and weighing more than 25 pounds—almost twice as massive as a Tundra Swan. Getting airborne requires a lumbering takeoff along a 100-yard runway. Despite their size, this once-endangered, now recovering species is as elegant as any swan, with a graceful neck and snowy-white plumage. They breed on wetlands in remote Alaska, Canada, and the northwestern U.S., and winter on ice-free coastal and inland waters.”

I started early at Lake Artemesia, which had only the usual suspects,and not very abundant.

Buddy Attick was also slow, but I did see a few birds I hadn’t found in a while.

A flock of Blue Jays was moving around the park.

White Throated Sparrows are all around the lake.

This Robin has fund a nice feast.

This Ruddy Duck is stretching to rearrange his feathers.

I haven’t seen a White Breasted Nuthatch in quite a while. 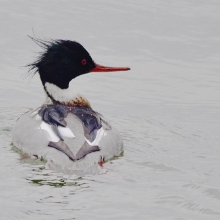 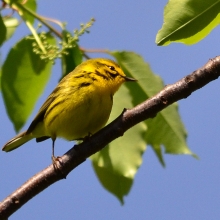 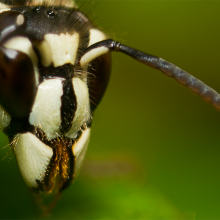 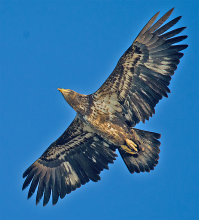 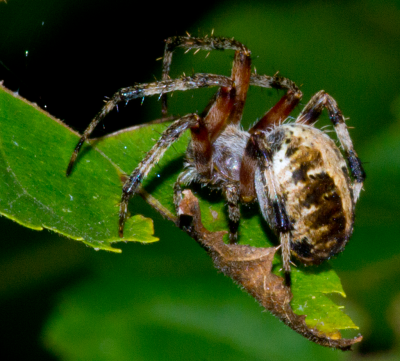