I was joined by 3 lovely ladies this morning at Governor Bridge. Diane, Dianne and Linda V. are members of the AABC and were able to get some time to explore with me, and we knocked ’em dead. Many warblers showed up early, along with some other nice birds, and the ladies kept birding while I searched for bugs.
A good time was had by all.

This Chestnut Sided Warbler was shot in the early morning light with a flash.

This Yellow Throated Vireo is from a couple of days ago. I didn’t realize I had it, and it’s a first for me.

I was very lucky to capture two Cape May Warblers in one image.

I’ve never seen so many Cape May Warblers.

This Northern Parula was a mild surprise.

This Northern Cardinal ignored us while he was eating.

This Common Yellowthroat seemed to be solo.

I couldn’t ignore an Eastern Phoebe who was so eager to pose.

This distant Raven is just here for the record-a first.

Red Eyed Vireos are fueling up for migration.

This Tufted Titmouse has a real mouthful.

This Yellow Billed Cuckoo hasn’t been around much recently.

I’ve always had trouble getting a good pose from a male American Redstart.

Despite promising weather, migrating birds were scarce this morning. A sunny sky seemed to indicate a good day, but warblers were few and far between.
A Carolina Wren posed nicely, but the bugs were more photogenic.

This Carolina Wren stayed on a branch and preened for quite a while.

Today’s Bugs, and a couple of flowers.

Sunny mornings always seem to be the best, and today was no exception. A large flock of warblers showed up around 7:30, including many Black Throated Greens, Magnolias, Blackburnians and Chestnuts were there as well, and Red Eyed Vireos were plentiful. Although I’ve seen a few Ruby Crowned Kinglets, these are my first decent images.The bugs treated me well also.

Although I’ve seen a few Ruby Crowned Kinglets, this is my first image of the season.

It’s my blog and I can post as many Black Throated Green Warblers as I want.

Red Eyed Vireos were feeding right alongside the warblers.

Chestnut Sided Warblers are marked differently in the Fall and Spring.

Another gloomy, cloudy day kept the available birds to a minimum, and it was a disappointing day. Tomorrow is supposed to be sunny, so we’ll see.
Even the bugs were scarce, but I did find a Dragonfly I’ve never seen.

This Red Eyed Vireo was active in the early morning gloom.

The Tufted Titmouse is so common I often pass them by.

The Magnolia Warbler was the only migrant I saw this morning.

A cloudy and overcast morning made birding difficult, and probably hindered the morning flight of migrants. I managed to find a few birds, including the FOS Ruby Crowned Kinglet, but it was a disappointment overall.
The bugs treated me better, and, with Graeme’s help, I captured several good bugs.

This Magnolia Warbler foraged in a bush right over my head.

Green Herons are plentiful at Governor Bridge, but hard to photograph.

This Garden Spider has captured a Cicada larger than he is.

Even though we must be getting overdue for rain, I welcomed another cloudless day with great temps. I got to Governor Bridge around dawn, and 45 minutes later the birds started coming around. Once again there was a good variety of warblers, and a couple of other migrants made for a great day.
I’m including some birds and bugs from yesterday because I didn’t have time to process everything.

The sunrise sky at Governor Bridge.

Magnolia Warblers are still coming through.

Cape May Warblers must be migrating together.

This Northern Cardinal was enjoying the sunshine.

Warblers, warblers everywhere and hardly time to think.
I’ve wondered about my strategy of going to the same place so many times, but I wonder no longer. I was surrounded by warblers for an hour or so, including the relatively rare Connecticut Warbler. Several other birds made it into a near perfect day.
I did find a few bugs, but I didn’t spend much time on them.

Cardinals are year round residents.

Magnolia Warblers continue to be plentiful.

This Scarlet Tanager is wearing his Winter uniform.

I thought this was a Blackpoll Warbler, which just goes to show how confusing Fall warblers can be.

The perfect weather ended today, with cloudy, gloomy skies that challenged the photographer. Only a few warblers appeared, and they were most elusive.
The bug tour treated me somewhat better.

This Common Yellowthroat was foraging quite close to me.

This Downy Woodpecker remained high in the trees.

Although the weather was ideal, the birds just didn’t show up as expected, so I saw very few warblers. Those few didn’t cooperate at all, so I had to settle for a few residents.
The bugs treated me better.

I was surprised to see this Blue Gray Gnatcatcher who’s a bit late to migrate.

This Flycatcher may be an Eastern Phoebe.

The distinctive song of the White Eyed Vireo will soon be only a memory.

This spider has captured a Leafhopper

Today was a bit more cloudy, but there was still enough good light for a few images. The warbler flock wasn’t as large or varied, but we still have two or so weeks of migration left.
I also found a few decent bugs.

American Redstarts are still passing through in small flocks.

This Northern Cardinal has found a nice meal.

Chestnut Sided Warblers are only seen here during mogration.

I’ve always liked the look of the Red Bellied Woodpecker,

Northern Parulas aren’t as common as other warblers.

Many small birds, like this Red Eyed Vireo, get quite acrobatic when foraging.

This American Robin is a juvenile. 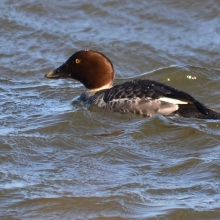 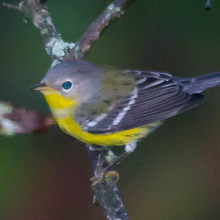 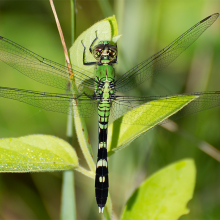 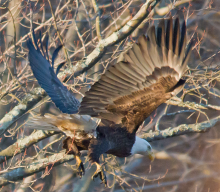 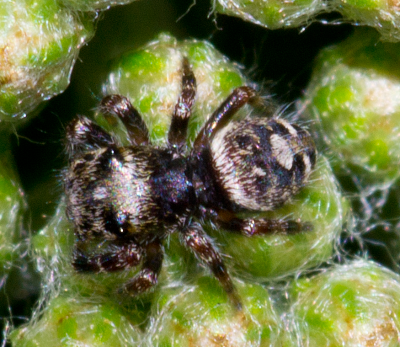