A cold and windy Spring so far. I went out yesterday morning and skipped a couple of spots because it was just too cold.

Graeme and I got to Bombay Hook again, and the Trumpeter Swans are nesting for sure. My amateur guess is late May for chicks (32-34 days incubating).  I think the Jonas Green Herons may be feeding chicks, but I haven’t got the angle to see into the nests. I’m not seeing any migrants to speak of, but it’s early days yet.

Lots of Wood Ducks this year, and a couple of Owls have been a bonus.

This Trumpeter Swan is putting his rivals on notice.

This is my 10th year of watching the Possum Point Ospreys.

The Bombay Hook Mute Swans may be nesting.

There were many Bald Eagles at Bombay Hook.

These Great Horned Owl chicks are at Thomas Point.

These Black Vultures found a dead Opossum at Quiet Waters.

It’s been a good year for Wood Ducks.

This Great Blue Heron was at Bombay Hook

This is a Short Billed Dowitcher.

These Willets were mating at Bombay Hook.

Eastern Bluebirds are numerous this year.

This Red Winged Blackbird hen was at Beach Road.

This Gadwall seemed to stay later than his buddies.

The routine hasn’t changed much; Local parks, check the heronry, try the Eastern Shore. Graeme and I went to Bombay Hook a few days ago and saw a lot of birds, including a tree full of Night herons.

I’d been hearing the Trumpeters were in the area,  but had only seen them once until I found them at Beach Road. It looks a lot like they’re building a nest, but it’s not a sure thing.  I thin k that’s a relatively rare occurrence in MD, so it could be exciting.

No warblers to speak of yet, but a couple of owls and some Wood Ducks make up for it.

Many Great Egrets were in the marshes.

This Great Egret was feeding at Quiet Waters.

Many Ospreys are nesting at Possum Point.

We found this American Kestrel as we left Bombay Hook.

A single Common Merganser showed up at Bombay Hook.

This Red Winged Blackbird was looking for a mate.

We saw over ten Bald Eagles.

All t he birds in the heronry seem to be incubating.

This barnyard Mallard is nesting at Quiet Waters.

The Trumpeter Swans disappeared into the reeds, where they appear4ed to be making a nest.

In ten years of watching I had never seen an egret of any kind at Quiet Waters, so this was a surprise. They’re marsh birds, and not really expected at QW which is more woodsie.

It’s the season of Wood Ducks, Gadwalls and Great Blue Herons so far. I’m still tracking the heron nests, and I found an owl nearby.

My only small migrant so far is an Eastern Phoebe, but the warblers will be here soon .

A friend found this Great Horned Owl and two chicks.

This distant Red Throated Loon was a bonus, as I haven’t seen many.

Gadwalls seem to be thriving.

Gadwalls seem to be thriving.

This Heronry has at least three active nests

Yellow Rumped Warblers have been consistently hanging around the pond.

Osprey returned to the area around the first of March.

All the Hooded Mergansers seem to have left the pond.

A half dozen or more Northern Rough Winged Swallows are hanging around the pond.

First Hermit Thrush of the year. 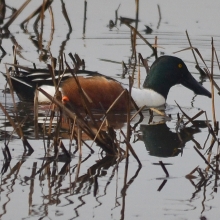 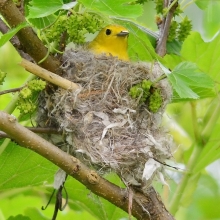 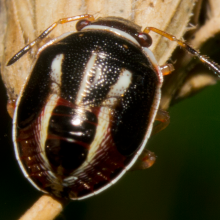 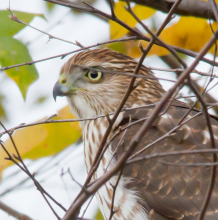 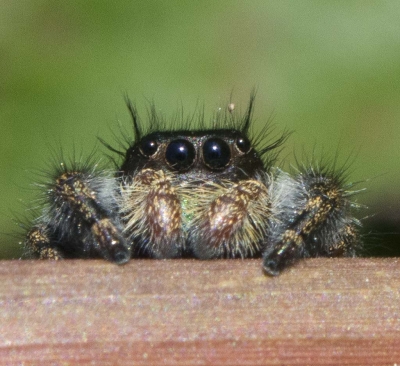