After three days with no significant birding, I was eager to see if Sandy had blown any birds our way. After a brief doctor’s appointment, I set out for Terrapin Nature Center under cloudy skies with a threat of rain and arrived about 10:00 AM. While there were many active birds, I didn’t see anything unusual, but I did get a few good images. I did see a lone, bedraggled Osprey on the beach, but he was too distant for a good shot.

This appears to be an immature Bald Eagle.

This Goldfinch hasn’t finished his Winter molt yet.

Cardinals were abundant and active.

I heard several Carolina Wrens, but this was the only one who would pose.

This Song Sparrow was enjoying a bath in this puddle.

There was a large, mixed flock of Sparrows along the beach path, including this Field Sparrow.

This White Throated Sparrow chose a nice place to pose.

I saw this Red Shouldered Hawk land at quite a distance, and was able to move closer to get this shot.

It was a dark and cloudy morning, but the weatherman promised no rain, so I set out early for Terrapin Nature Park. It wasn’t a totally successful day, but I did see a lot of geese and the Yellow Rumped/Kinglet invasion is still ongoing.

This is the first time I’ve seen so many Canada Geese on the marsh pond, so it may portend the arrival of a variety of water birds soon.

I captured this Yellow Rumped Warbler at ISO 1600 due to the low light, hence the grainy look.

Several Snowy Egrets were fishing in the marsh pond.

Another good look at how the Red Bellied Woodpecker gets his name.

Unseasonable weather continues, and I have to wonder about climate change, especially after watching the latest NOVA special. It’s a weird world where money can trump good science.
I spent a couple of hours at Greenbury Point to virtually no avail, followed by a quick trip to Truxtun Park that wasn’t much better. Where are the birds?

These Double Crested Cormorants are resting on an Osprey nesting platform. The one on the right is a juvenile.

If you can’t find a bird to photograph, head for the bridge at Truxtun Park and this Great Blue Heron will accommodate you.

I don’t take many feeder shots, but a very nice couple (Thanks, Bill and Lisa) allowed me into their yard full of feeders where this White Breasted Nuthatch was hanging out.

I was in a good position to capture this Great Blue Heron as he flew by.

This Titmouse was taking advantage of the feeders also.

I’m still trying out new places, and today it was Wooton’s Landing Wetland Park in Lothian. It’s a well maintained park with access to the Patuxent river and a large marsh area, and looks very promising. I didn’t find anything great today, but I got a few decent pictures and I’ll go back soon.

I’m seeing migrating Ruby Crowned Kinglets everywhere I go. There must be many thousands of these birds just in Maryland.

I don’t often photograph Blue Jays on the ground.

The Dark Eyed Junco migration is well under way.

There were many Bluebirds in the area.

I decided to try a new place today, so I went back to Lake Artemesia in Beltsville for a closer look. While not an overwhelming success, I did get a new bird and saw my first Racccoon in a tree. A good day, all in all.

This Ring Necked Duck is a first for me. It was taken during the morning fog.
From Cornell:
“Of all the diving duck species, the Ring-necked Duck is most likely to drop into small ponds during migration.”

These Canada Geese were enjoying the early morning tranquility.There were dozens of geese on the lake.

This Beaver is carrying breakfast back to his den.

This Ruddy Duck was patrolling the lake by himself.

There were several flocks of Cedar Waxwings in residence.

This Ruby Crowned Kinglet is giving us a look at his crown.

This Mockingbird’s pose was so bizarre, I took a closer look. In the preceding image you can see his foot is tucked up under his wing, but I don’t know why.

This Brown Thrasher flew into the frame while I was photographing another bird.

I’ve seen Raccoons around garbage cans or in the back yard, but this is the first time I saw one near his den.

This Blue Headed Vireo was a nice find. (Thanks, Ed)

This may be a female Ruddy Duck, but I’m not sure. It turns out to be a Pied Bill Grebe (Thanks, Kevin).

The weather gods continue to favor the birder. I set out early for Terrapin and arrived just about sunrise. After a quick tour of the interior, I set out for the beach path, and walked the entire without seeing a single worthy bird. Most unusual.

After returning, I did another circuit and found a Brown Creeper, a bird I’ve been seeking for quite some time. It’s not a great shot, as he only gave me a quick glimpse before disappearing, but I’ll take it.

This juvenile Cedar Waxwing will get his adult coloration early next year.

There are very large flocks of Robins in the park.

Some young deer seem uncertain what to do when they see a human.

Flocks of Canada Geese are a common sight at this time of year.

I hate when a picture isn’t perfectly focused, but I’ve been looking for this guy for a while, so it will do.
From Cornell:
“Cool Facts
The naturalist W.M. Tyler, writing in 1948, captured this species’ energy and fragility in a memorable description, “The Brown Creeper, as he hitches along the bole of a tree, looks like a fragment of detached bark that is defying the law of gravitation by moving upward over the trunk, and as he flies off to another tree he resembles a little dry leaf blown about by the wind.””

Migrating Ruby Crowned Kinglets seem to be everywhere in Maryland.

This Yellow Rumped Warbler will be more colorful in the Spring.

When you watch a Downy Woodpecker, you’re impressed with their thoroughness.

I was watching some Phoebes when this Hermit Thrush came into view.

When a Great Blue Heron has spotted his prey, he strikes very rapidly.

The Great Blue Heron usually catches a fish sideways to his beak, then immediately starts turning it to make swallowing easier.

The great weather continued today, but not the great birding. I did see a distant Ruddy Duck, which may mean more ducks are on the way soon.

This distant Ruddy Duck was by himself.

I saw hundreds of Song Sparrows in large flocks.

This Chickadee was hanging out with a flock of Goldfinches.

This Goldfinch has assumed his drab Winter plumage.

I checked with my Facebook group last to try to find a new spot, and they recommended the Governor Bridge Natural Area, which is on 301 South, and not too far from my home. I headed there at about 9:30. It’s certainly got possibilities, with a large wooded area, a meadow/shrub area and a large lake. but there was very little action. I’ll try it again some day.

One advantage of Fall is the possibility of new backgrounds for birds like this Eastern Phoebe.

This Bald Eagle flew over the lake shortly after I arrived, and was the highlight of the day.

This Great Blue Heron also flew over the lake.

It took me half an hour to get a decent picture of this Ruby Crowned Kinglet as he flitted rapidly from branch to branch.

Another gorgeous day for birding! I debated leaving my light jacket at home, but decided to take it just in case. I spent some time at Possum Point first, looking for migrants in the pine trees, then headed over to Greenbury Point. I did spot a Junco, but the highlight was the huge flocks of Sparrows and Goldfinches out by the point, and one cooperative Downy Woodpecker.

This Flicker was up early, warming in the sunrise.

Yellow Rumped Warblers are being reported all over Maryland, so there must be many thousands of these birds in the area.

I see a lot of Bluebirds at Greenbury, and they’re hard to pass up.

There’s been a large influx of Song Sparrows.

The Dark Eyed Junco is a sparrow who spends the Summer in Canada and winters in the US.

A large flock of Goldfinches was feeding out by the towers. There were so many it startled me the first time they took off.

The Goldfinches and Sparrows ignored this Downy Woodpecker as he went from tree to tree among them.

This small puddle had so many visitors it reminded e of a jungle watering hole.

I went for a short walk before dinner, and found several Kinglets foraging in the bushes a short distance from my home.

I enjoy birding, but I’m not a fan of cold, windy weather, so I’m glad the good weather is continuing. I had to fix a friend’s computer this morning, so I left early in order to get to the park near dawn. It was just as busy as yesterday, but I didn’t get the variety I was seeking. The Eastern Towhee was a nice find, however.

I’ve had difficulty getting a good pose from these birds, so I’m thankful to this one. It’s an adult male, red eyed, Eastern Towhee.

This Red Bellied Woodpecker may be contemplating the coming day.

From Cornell:
“The Yellow-bellied Sapsucker is the only woodpecker in eastern North America that is completely migratory. Although a few individuals remain throughout much of the winter in the southern part of the breeding range, most head farther south, going as far south as Panama. Females tend to migrate farther south than do males.”

I saw many more Ruby Crowned Kinglets than on previous days.

I don’t often see Bluebirds at the park. 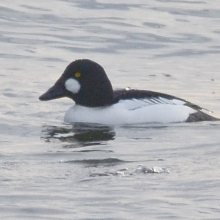 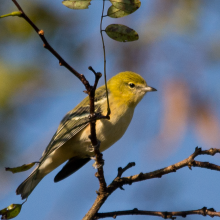 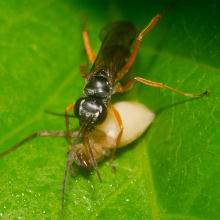 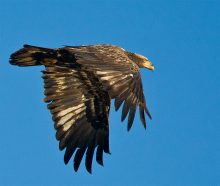 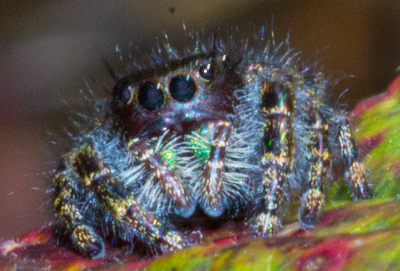