After 4 days of rain and fog, I was eager to get out. There was another report of as Snowy Owl at Hooper’s Island, so I went back to take a look. My bad luck continued.  I did find a nice Merganser to make the trip worthwhile.

Drive was a little barren with many fewer Snow Geese, but an increase in Tundra Swans. There were very few ducks, no terns and no sandpipers.

The eagles weren’t terribly active either.

This Dark Eyed Junco was part of a flock at Quiet Waters.

I usually pass up Mourning Doves.

Only a few Northern Shovelers were present.

A lone Great Blue Heron was passing by.

Many Ruddy Ducks were resting at Quiet Waters.

I found this Horned Grebe at Quiet Waters.

Many Tundra Swans were resting in the marsh.

This Snow Goose stayed in one spot all the while I was there. It may be injured.

A Lesser Scaup at Oakley Street.

This Mallard was stretching his wings.

This Red Breasted Merganser was fishing at the Hooper’s Island Bridge.

There was a Snowy Owl reported at Hooper’s Island, which is just a few miles from Blackwater, and I took a look this morning. By the time I got to Blackwater, the fog was so thick that I waited a while before heading to the Hooper’s Island bridge.

Alas, my lack of Snowy Owl luck continued, and I found only a few birds, and in poor light.

At Blackwater, there were thousands of Geese feeding in the surrounding fields, which gave some good photo opps.

Still the fog continued for quite some time, and the light never got really good. I’m including a few images from yesterday’s trip to Possum Point and Quiet Waters.

You can usually find a Bald Eagle perched along Wildlife Drive.

I was able to get quite close to the large flock of Snow Geese.

There were two Great Blue Herons standing in the shallow water.

I got this image just as this Bufflehead rounded the corner at Possum Point.

You can usually find a Black Backed Seagull at Possum Point.

10-12 Red Breasted Mergansers were feeding near the point.

This Horned Grebe and two companions were foraging right under the bridge.

I started at Quiet Waters this morning, and it was nearly dead. I went straight to Thomas Point, and it wasn’t any better, with only a few, distant birds.

I then stopped at my friend’s house, and got lucky.

Shortly after I arrived, they all started moving around, and I managed a few decent flight shots. A good morning.

I didn’t know I had the American Wigeon until I uploaded the images. There were a lot of birds, moving quickly.

Several Mallards were travelling with the large flock of Canvasbacks.

There were a hundred or so Canvasbacks.

I didn’t know this was an American Wigeon until I uploaded the images. There were a lot of birds, moving quickly.

I made another long trip this morning, which isn’t my usual practice. It looked to be the last good weather day for a while, so I took advantage of the chance.

There were more ducks than in recent visits, ‘though not as many as I’d like.

I followed this Northern Harrier for a while, but never got really close.

A few Northern Pintails were foraging in the marsh.

There were more Buffleheads than on previous visits.

I don’t recall seeing as many Eagles on any previous visits.

There were a few Northern Shovelers in Bear Swamp Pool.

There were several hundred Snow Geese flying around.

This Belted Kingfisher is a female, but you can’t tell from this image.

We were promised sunny weather, so I made the trek to Blackwater this morning after several days of crummy weather. The weather was certainly good enough, but there were fewer birds than I had hoped.

Eagles, Geese and Swans dominated, but other species, like ducks. were not as numerous as in the past. I ventured further afield than usual, but had no luck.

Still, it was good enough, and I expect to make more trips soon.

I only found one pair of Northern Shovelers.

Several Great Blue Herons were standing guard in the marsh.

There were three different flocks of Snow Geese.

This Bald Eagle flew off just as I approached.

I haven’t seen a Delmarva Fox Squirrel in quite a while.

There were only a few Hooded Mergansers, and they spooked easily, as usual.

The weather guessers called for sunny, today, and it was:for about an hour, after which it was quite cloudy.

There were plenty of decent birds at Blackwater, but the poor light meant marginal images in some cases.

I made another stop at Oakley Street in hopes of some better images, and did OK.

Another nice surprise. Northern Flickers don’t often cooperate as well as this one did.

A dozen or so Common Mergansers were feeding in the marsh.

A couple of thousand Snow Geese are still hanging around.

I found this American Wigeon at Oakley Street.

There were hundreds of Canada Geese in the fields and on the water.

This juvenile Cooper’s Hawk was a nice surprise, as I haven’t seen many hawks recently.

I met Graeme at Lake Artemesia this morning, and we made several circuits of the lake. A rare goose has been reported here a couple of times, and we found it right away, mixed with a flock of Canadian Geese. It’s not uncommon for odd species to mix with these geese, and I have looked many times, but this is one of the few times I found anything.

There were several interesting birds on the lake, but there was a lot of ice, also, which limited the places to search.

We walked along Indian Creek on the way out, and found a few passerines as we left.

This Brown Creeper was a nice surprise.

We saw about 200 Canada Geese.

Two Hooded Mergansers were hiding in the large flock of Geese.

There were 20 or more Ring-necked Ducks.

A single Bufflehead male was foraging near shore.

Many Mallards were feeding in the lake.

Several Chickadees were playing along the trail.

Cornell: “Breeding across the tundra from Nunavut to Siberia, across Russia, and in Greenland, the Greater White-fronted Goose has one of the largest ranges of any species of goose in the world. In North America, however, it is common only west of the Mississippi River, where it is found in large flocks in wetlands and croplands.”

Graeme was dressed for the weather. 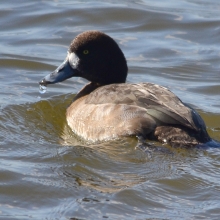 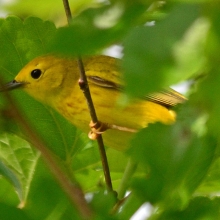 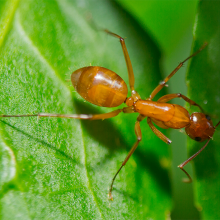 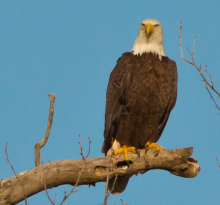 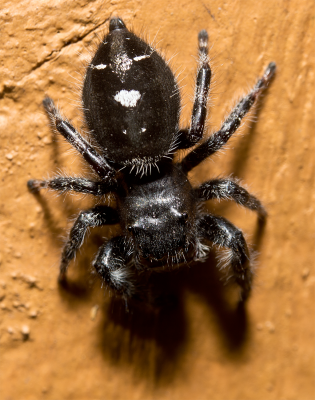